Pension wealth – keeping it in the family

A key benefit to pensions since the introduction of the Pension Freedom rules in 2015 is the ability for accumulated pension wealth to cascade down the generations, whilst continuing to enjoy the tax freedoms that the pension wrapper provides.

In addition, the new rules fundamentally eased the regulations governing how funds could be extracted from defined contribution pension arrangements such as personal pensions.

Whilst initial newspaper headlines sensationalised the resulting potential for trips to luxury car dealerships, some of the finer details may have been missed. The primary changes of pension freedom rules provided individuals with much more control over their pension savings than before - restrictions surrounding how pension benefits could be drawn were lifted which meant that many more people were realistically able to choose an alternative to annuity purchase. In addition, pension freedoms fundamentally changed the treatment of pension funds on death.

Prior to April 2015, the tax treatment of defined contribution pension funds on death before age 75 depended on whether funds had been crystallised (i.e. tax-free cash had been paid and the remaining funds invested and paying an income) or remained uncrystallised (i.e. no benefits had been taken from the fund). Uncrystallised funds could be passed on to whomever you had nominated as a lump sum and free of tax.

Any remaining funds which had been crystallised could pass to a financial dependent (normally your surviving spouse) and they could continue in income drawdown with the full fund with any income taxed at their own marginal rate. Alternatively they, or anyone else you had nominated (e.g. your children), could have the remaining funds paid to them as a lump sum, subject to 55% tax.

Should your spouse continue in income drawdown, on their subsequent death, any remaining fund value would be paid as a lump sum, net of 55% tax, to their nominated beneficiaries. This meant any funds eventually passing to your children would be taxed at 55%.

The rules now provide the option for funds to remain within the tax favoured pension tax wrapper after your death, giving you the ability to pass the funds down through the generations, free of any inheritance tax. In addition, the range of potential beneficiaries has been expanded from financial dependants to any nominated beneficiary.

Should you die before age 75, any remaining defined contribution pension funds, whether crystallised or not, can be passed to any nominated beneficiary free of tax. The beneficiary can then either extract the funds as a lump sum or retain the funds within their own pension plan and extract an income (regular or ad hoc) tax free via income drawdown. There will be a test against the lifetime allowance (which is currently £1,000,000 unless you hold some form of protection) and any funds in excess of the lifetime allowance will be taxed at 55% if the beneficiary takes the excess funds as a lump sum, or at 25% if retained within the pension fund and nominated to provide income.

On death after age 75, the beneficiary has the same options of extracting funds as either a lump sum or income, however any funds extracted will be liable to income tax at the beneficiary’s marginal rate.

Should your beneficiary retain the pension funds within a ‘flexi access drawdown’ plan, they can then nominate their own beneficiaries (e.g. your children or grandchildren) in respect of any pension funds remaining on their subsequent death. Their named beneficiaries will have the same options of taking a lump sum or income, and the tax treatment will depend on the age of the deceased beneficiary at their date of death.

For example, should you die age 76, your pension funds can pass to your wife. If she extracts an income it will be taxed as income at her marginal rate as you died after age 75. However should she subsequently die aged 74, then any remaining funds can pass to your children, and as your wife was under age 75 your children can extract pension funds tax-free. They can then nominate their own children (your grandchildren) to receive the remaining pension funds on their eventual death.

Table 1: Pension death benefits – below and above age 75 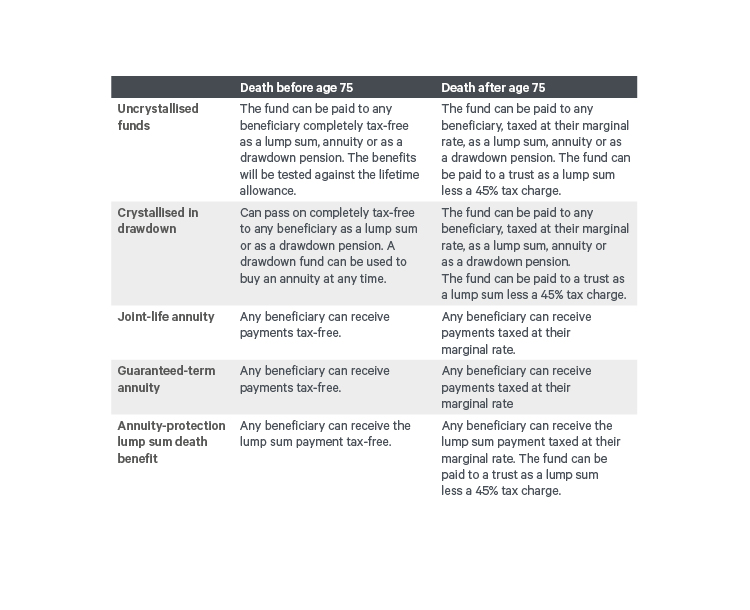 During this time, any funds remaining within a pension plan remain outside your and your successors’ estates for Inheritance Tax, making pension plans one of the most tax efficient ways of passing monies down through the generations.

Instead of keeping your pension funds invested and drawing an income, you still have the option of purchasing an annuity, guaranteed to be paid for your lifetime. Although these have fallen out of favour due to the low annuity rates being offered and the lack of flexibility, annuities can remain appropriate in certain circumstances.

It is now possible to include anyone you wish as a beneficiary when setting up a joint-life annuity, you are no longer restricted to just including your spouse.

Should you purchase a joint life annuity and include provision for a spouse’s pension (or other nominee), then the income paid to your spouse (or nominee) will be tax-free on your death before age 75 or taxed as income on your death after age 75.

The principal downside of annuity purchase remains the loss of capital on death (unless value protection is included at outset as an option).

Unfortunately, none of these flexibilities are available under final salary (or defined benefits) pension scheme. This means that a pension can only be paid on your death to a dependent and the income received will be taxable, even in the event of your death before age 75.

Generally, no capital lump sum is paid on death – instances where this may not be the case include where an election for a guaranteed period has been made - and has not expired, or a death in service benefit.

This is one reason (along with the current high transfer values on offer due to low gilt yields) that transfers from final salary schemes have become highly topical. However, this is a hugely complicated and heavily regulated area of financial planning. Any recommendation to transfer from a final salary scheme will be dependent on your own individual circumstances.

Therefore, it is important to review existing pension plans to ensure that the benefits payable on death will reflect your wishes. In reviewing your pensions you also need to ask yourself:

It is also more important than ever that at retirement you consider how best to fund your income. Now that pension funds can be kept outside your (and your successors’) estate for inheritance tax, it may be more tax efficient to take income from other investments, or indeed from cash deposits.

We have considered the new residence nil-rate band which in effect raises the inheritance tax threshold to £1 million per couple from 2020 (subject to a total estate value of no more than £2 million and a main residence, passing to direct descendants and valued at £350,000 or more in 2020/21). By spending your assets outside of your pension fund you will reduce your taxable estate and potentially pay less inheritance tax on your and your spouse’s eventual death.

Even where the pension arrangement offers all the new freedoms, it's crucial that nomination forms are kept up to date and fully reflect your wishes. As trustees have discretion over how the death benefits are paid, a nomination form helps guide them in exercising their discretion and they will rely on the most recent nomination form they have received. Nomination forms can normally be changed at any time.

The new rules make it even more important that nomination forms are correctly completed. If you want someone other than a dependant to inherit and would like them to have the option of drawing an income, you must name them on the nomination form.

You can also nominate a charity to receive any remaining pension funds. Should you have no dependants, and so long as you have named the charity in a nomination form, any such payments will be tax-free even on death after age 75.

Finally, you should note that funds on death before age 75 must either be paid out as a lump sum or else designated as drawdown within two years of your death. If this is not actioned within this timeframe, the funds will be taxed as if you had died after age 75.

Given the new flexibilities, not just in relation to death benefits but also the flexibilities and options in how income is taken from pension plans, it is important that you ensure that your pension plans reflect your financial objectives.

Please contact your Davy wealth manager should you wish to discuss any of these points or if you would like us to carry out a review on your behalf.

WARNING: The information contained in this article is based on Davy's understanding of current tax legislation in the UK and the current HMRC interpretation thereof and is subject to change without notice. It is intended as a guide only and not as a substitute for professional advice. You should consult your tax adviser for the rules that apply in your individual circumstances.

WARNING: The Financial Conduct Authority does not regulate tax advice.

Make 2020 the year you plan your future