Putting the panic into perspective

First, a word of consolation. If you’ve been unusually unsettled by recent events or find it difficult to follow what’s really going on, then rest assured that you’re not alone. Nobody can confidently say that they know how far the virus will go, nor what it will do to the economy.

In fact, the current situation is so unclear that in March the US Federal Reserve decided not to publish its usual economic forecasts. When asked why, chairman Jerome Powell responded, “that’s just not something that’s knowable … writing down a forecast didn’t seem to be useful”.

So, what is an investor to do? For a start we can look at the price changes in stocks and bonds and compare these with past crisis periods to see what the markets might be implying.

We can see in figure 1 below, that this was the fastest bear market, i.e. price decline of 20%, of all time. Next we look at the VIX index in figure 2. This measures the volatility of the S&P 500 index of US stocks, as implied by options prices. It’s sometimes called the “fear gauge” as it captures the cost of insuring the market. In March, it exceeded the levels seen during the tech crash of 2000, the Eurozone crisis of 2011, and even the financial crisis of 2008. In other words, the market is panicking more now than at any time during these episodes. 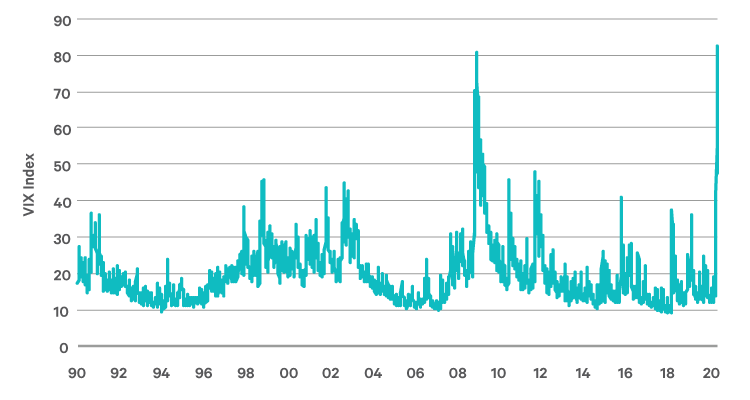 What kind of bear market?

Each bear market has its own specific causes, but analysts have grouped them into three broad types:

If you believe that the virus will cause a recession, which is now the consensus view, then the time to sell equities is behind us already. The real question is whether it will cause a financial crisis.

Will this health crisis become a financial crisis?

Of course, nobody can say for sure, but if we compare 2020 with 2008, we get some idea of the likelihood of another “great recession”. The imposed shut-down has brought the world to a sudden stop, just like in 2008, and market liquidity has disappeared. Some have complained that policymakers are again behind the curve in addressing the problem.

In fact, central banks have reacted a lot faster than in 2008 to inject liquidity into the system and provide cheap funding for banks to lend more.

Also, rather than austerity measures, governments have announced record stimulus plans to support households and businesses whose livelihoods have been hit by the virus. The biggest difference though, between 2020 and 2008, is the lower levels of leverage and the higher levels of cash across the system. This makes the chance of another financial collapse much lower than before.

What happened to the cycle(s)? 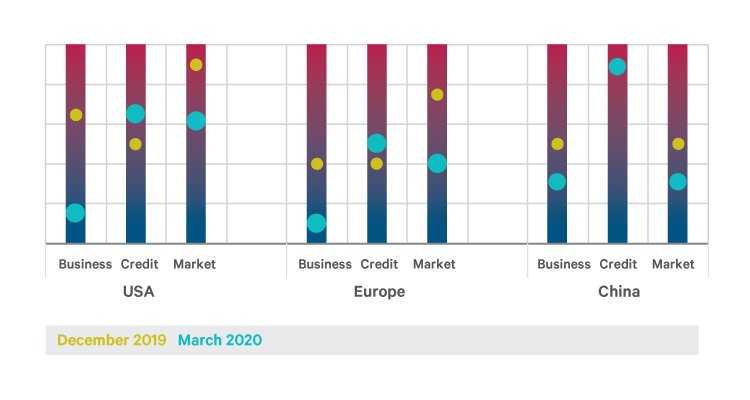 At the start of the year, we viewed the business cycle as warm in the US, but not yet over-heating, due to the strength of the job market, the profitability of US companies, and the surprisingly low inflation. We saw Europe's economy we saw as lukewarm due to the lower growth and inflation levels. We also saw China as lukewarm, by their own standards, due to the government’s efforts to manage their credit growth and the ongoing trade war.

Now with many measures put in place to contain the virus, it seems almost inevitable that most economies will see a sharp contraction. In China this will hit first quarter numbers worst, whereas for Europe and the US, the second quarter numbers will see the largest declines. Forecasts change every week, and the range of predictions is very wide, but the rise in unemployment is projected to be potentially as bad as of what we saw in the financial crisis of 2008. A silver lining among the dark clouds is that the collapse in oil prices will ease the burden on struggling consumers.

What about the credit cycle? If we can draw some comfort from the business cycle downturn, is that it's happening at a time when the credit cycle is not in a dangerous place. There are certainly stresses in corporate credit markets, particularly in the energy sector, and even some governments, like Italy, have seen pressure. But stronger personal and bank balance sheets mean that the chances of a deep long-lasting recession are much lower than before.

Finally, the market cycle. At the start of the year we were concerned that the market had moved ahead of the economy and prices were too optimistic. This made us cautious about our equity allocation. Now the market has moved sharply lower, again in advance of the economic data. The US market was expensive before the sudden stop and is closer to longer term average valuations now. Europe and China were less expensive then and are even cheaper now. 2020 earnings will undoubtedly drop, distorting short term price-to-earnings ratios, but on a longer-term basis, now the markets are much more attractively priced than they were.

Investing is all about making decisions under uncertainty. Taking a longer-term perspective can  help reduce this uncertainty, although not eliminate it. For example, we can’t say when the virus will pass and the economy will recover, just that it will eventually pass, and the economy eventually will recover. For investors with a multi-year horizon, the balance of reward over risk has moved in favour of owning more stocks. Especially compared to cash and bonds with negative yields. Therefore, in our discretionary portfolios we are increasing the allocation to global equities.

Of course, news flow may get worse, and markets may fall further. Therefore, we are making the increase in a series of incremental steps over a period of time. We understand that even this cautious approach may feel uncomfortable for some clients.

While it’s only human to worry about worse outcomes, and prudent to keep liquidity for difficult times, being able to step in when others panic is the most significant advantage that we have as long-term investors.

WARNING: Past performance is not a reliable guide to future returns and future returns are not guaranteed. The value of investments and of any income derived from them may go down as well as up. You may not get back all of your original investment. Returns on investments may increase or decrease as a result of currency fluctuations.

WARNING: Forecasts are not a reliable indicator of future results.

The Davy Group uses cookies to enhance your browsing experience and provide us with useful information on the use of our website. By continuing to browse the site, you consent to their use. To find out more about Davy Group's use of cookies and how to manage and disable cookies visit our Privacy Notice.