Over the last few months we’ve had the fastest bear market of all time and the fastest partial recovery of all time. Economies are not even close to being back to normal yet, and corporate earnings are falling, leaving investors struggling to make sense of it all.

Why did the market fall so fast?

Markets hate uncertainty. While it’s debatable how much we ever really understand about the economy and stock prices, the sheer panic of late February and March revealed just how little we knew about the Coronavirus and its potential impact. Every day seemed to bring a more dire forecast and another draconian policy. Also, it was a human crisis of lost lives, rather than just an economic crisis of lost profits and jobs. As for investors, a higher proportion use cheap passive instruments such as exchange traded funds (ETFs), rather than carefully selected stocks or funds, more than ever before. Systematic or rules-based strategies may also have led to increased and faster selling than usual in a crisis.

Why has the market recovered so fast when the economy hasn’t?

Learning from the global financial crisis, central banks and governments came in fast and in massive scale – the announced stimulus was more than double that was seen in 2008, and happened within weeks, moving to ensure that the financial system did not fall apart. Another lesson learned from the 2008 stimulus was to support the real economy as well as the financial system. Job and wage protection schemes were rapidly implemented to bridge the sharp drop in growth. Even so, spending dropped as consumers increased their saving. An important difference between the economy and the market is that the market is forward-looking, anticipating what will happen, whereas economic data measures what did happen. Just as they didn’t wait to see the economy contract to sell-off in March, markets didn’t need to see the recovery to rally back. All they needed was a belief that a recovery was coming.

Lastly, it’s worth noting that the initial market recovery was not a broad-based one. It was concentrated in a small number of large stocks, mostly US technology companies. Other sectors were much slower to rally, perhaps a better reflection of the real economy. Only later in May did we begin to see a broader rebound, leading to the concern that stocks were again moving too far ahead of the economy.

The market may be forward-looking, but how far forward does it need to look to see beyond record job losses and continued constraints? To answer this, we examine potential growth paths for the economy and corporate earnings. 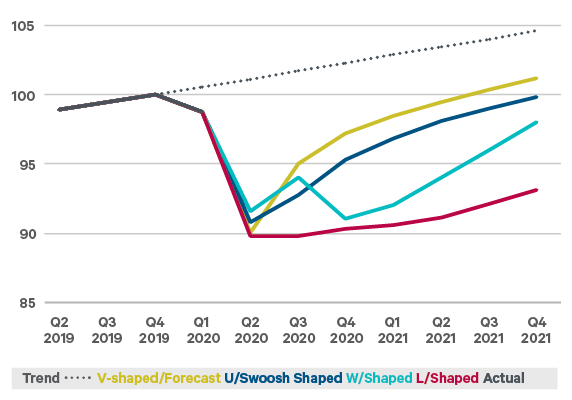 Forecast is Bloomberg Consensus Forecast as of June 2020

In summary, our base case is for a U- or swoosh shaped recovery, with the downside risk of a W-shaped scenario. We note that only in the optimistic case does the economy recover fully, i.e. back to its 2019 level, by the end of 2021.

Has the cycle turned already?

In our 2020 January outlook, "A Tale of 3 Cycles", we looked at the world along three dimensions: the business cycle, the credit cycle, and the market cycle. Here, we carry out a temperature check on the economy, credit levels, and the markets.

The lockdown sent the economy into the deepest contraction in decades, and the business cycle is stone cold by most measures. The temporary nature of the lockdown and the extraordinary amounts of stimulus mean that it may also be the shortest recession on record. We have already seen some data turn upwards, although levels are still very weak. China is a little further ahead, after going into and out of lockdown earlier.

We were as blind-sided by Covid-19 as everybody else, but as the recession struck, we drew some comfort from the state of the private credit cycle. The lower levels of personal and bank debt meant that the chances of another financial meltdown were low. It is true though that corporate credit metrics have deteriorated recently with falling earnings and increased borrowing.

Our main concern in January was the high valuation of the stock market, particularly in the US. The rapid recovery in US indexes, while earnings forecasts are revised downwards, has lifted short term valuation ratios to unusually high levels. Ratios which use longer-term earnings are lower, but still above normal. This doesn’t mean that the market must fall, just that expected returns are lower. As we see from the cycle heat chart, European and Chinese markets are closer to their long-term average valuations, given their weaker rebounds.

Where now for investors?

We have passed through the panic and relief phases, and now we’re at the reckoning phase. Is it reasonable or foolhardy to stay or get invested after the market has recovered so far and the economy is so weak?

Let’s put the question another way. Most of us will admit that trying to time the market is usually a waste of money, so do we know more now than usual that gives us more confidence in timing this situation? Unlikely. Many of the risks that we worried about, e.g. recession, government response, etc., have been realised, and many more unknowns lie ahead. Assuming that we can’t predict the evolution of the virus, our main concern as investors with a multi-year horizon is the high valuations of stocks, particularly in the US. But this isn’t enough of a reason to not be invested, it’s more a reason to lower our return expectations. With above-average returns no longer on offer, our appetite for owning stocks, which increased with the sell-off in Q1, has returned to normal in our portfolios.

However, this doesn’t mean that we want to bet against the market, by underweighting equities or stalling a phasing-in plan. It just means that we stick to our allocation plan. If the market does sell-off again, our appetite may increase again. For now, we resist the temptation to time in or out.

Warning: Forecasts are not a reliable indicator of future performance.

Investing in a crisis