In our “cautiously optimistic” outlook for 2022, we acknowledged that central banks would have to raise interest rates to cool down inflation.  But we took comfort from the fact that the Federal Reserve (the Fed) has a dual mandate to also support employment, and we expected that it would tread carefully.  Since then, Russia invaded Ukraine, energy prices have pushed inflation even higher, and the Fed has chosen to prioritize fighting inflation over protecting the economy.  It’s now clear that the “Goldilocks” world of not-too-hot inflation and not-too-cold growth is no more, and central banks will no longer automatically rescue the markets.  This realisation, more so than the inflation itself, is what has driven stock markets into bear territory, i.e. down 20%.

Not your average bear?

Most bear markets are associated with recessions, and despite all the bad news out there, the world economy is still growing, just at a slower and slowing pace.  Economists have raised their recession probabilities, but most still forecast continued growth.  For investors though, this may be irrelevant.  Markets look forward, and if they think a recession is coming, it’s entirely normal for them to sell off in advance.  Rather than try to predict their mood swings, we study the macro and market data to see if they may be over- or under-reacting.

The natural inclination for strategists is to look backwards and map the current crisis to the available history.  However, while there are similarities, no two crises are exactly the same, and fortunately we have had so few examples that historical averages have limited meaning.  But this doesn’t mean that we can’t learn anything from the past.  For example, a useful framework (developed by Peter Oppenheimer at Goldman Sachs) is to think of bear markets as being either cyclical, event-driven or structural.  Cyclical bear markets are caused by economic over-heating being followed by central bank over-tightening.  Event-driven bear markets are caused by surprise shocks, like the COVID-19 crash in 2020, and tend to recover quickly.  The most dangerous bear markets are structural, where a significant imbalance breaks or a bubble bursts.

The current situation looks most like a cyclical bear market driven by an economic slowdown, which may become a mild recession.  In the past, this would have typically led to a market decline of 20-30%, which is almost where the market has fallen to already. 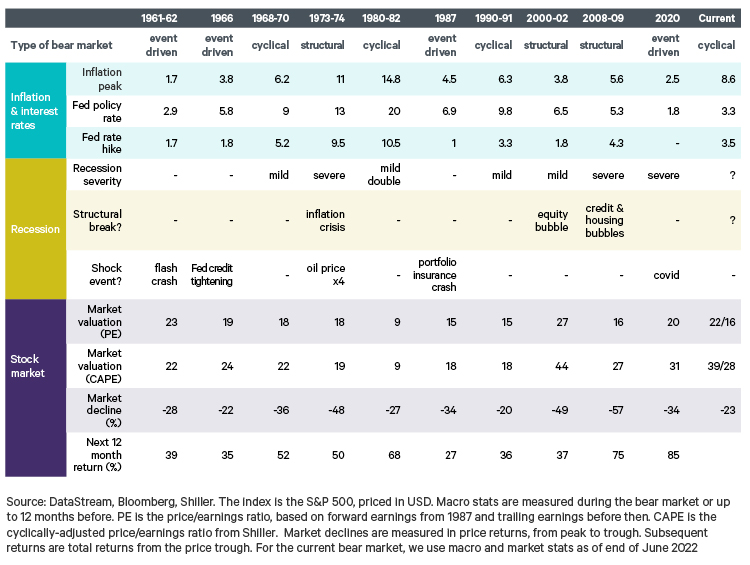 Could the sell-off get worse?

Of course things can always get worse; so where are the structural vulnerabilities that could turn a mild crisis into a severe one?  The most obvious danger is that inflation stays so far above target that the Fed is forced into more extreme rate hikes.  Even the more pessimistic forecasters are not predicting the prolonged double-digit inflation of the 1970-80s that led to double-digit interest rates and crushed the economy.  US consumers have started to slow their spending, but if a recession were to happen soon, household balances and corporate profits are strong, and household debt manageable enough that it would only be a mild contraction.

Another concern is that equity valuations at the start of 2022 were unusually high by historical standards, particularly in the US.  High valuations don’t cause sell-offs, but they make markets more vulnerable when corrections do happen.  Typically in recessions, valuations, and then earnings fall by 10-20% each.  All of the price decline so far this year has come from valuations falling by almost 30%.  An optimist would say this is clearly an over-reaction, whereas a pessimist would say it’s justified by the higher starting level and that things will get worse when earnings fall too.  Earnings growth forecasts (Source: IBES, MSCI, as of end of June 2022) for 2022 and 2023 are still close to 10%, so there is room for downward revision.  As for valuations, we note that most US price/earnings ratios are now close to their historical averages, while European, UK and Chinese ratios are well below theirs.

Lastly, there is the issue of liquidity risk.  A feature of the “Goldilocks” years, pre- and post-COVID-19, has been the abundant monetary liquidity in the financial system.  On top of interest rate hikes, central banks are also now reversing their multi-trillion dollar quantitative easing, or “money-printing”, policies.  Just as we don’t know exactly how much this boosted the system, we won’t know how much its reversal will hurt until it happens.  Financial markets are more complex and inter-connected than before, and problems in one area can cascade into others.  The good news is that banks are much better capitalized now, and the COVID-19 crisis showed that the financial system, with official support, is more resilient.  But we should learn to expect unexpected outbursts of volatility.

Where do we go from here?

The principal cause of the sell-off was central banks’ reaction to inflation, so unless other problems emerge, the markets should relax when inflation is visibly on a down-trend and central banks ease up on their tough tightening line.  As we learned from the April report, one month does not make a trend, so we’ll need to see the inflation index fall for a few months.  In the meantime, we’ll have to pay close attention to the US consumer, to job numbers, and to corporate earnings, to see if the Fed has over-cooled the economy.  Bond yields have already fallen recently on recession fears, not dis-inflation news, and ideally these would stabilise too.

The picture outside the US is more difficult.  Although European and emerging markets were less richly valued to begin with, their economic situation is more precarious.  The Eurozone is structurally weaker than the US, and if Russian energy supplies are shut off, a recession is probably inevitable.  Same for the UK, which has the added complication of Brexit making inflation and growth worse.  Emerging markets tend to struggle in stronger dollar / higher rate environments like the current one.  The lone major bright spot may be China, where the government may be ready to relax COVID-19 constraints and re-stimulate the economy, as inflation is not a problem there.

While we have to admit that we don’t know which path the economy or the market will take, one thing we do know is that the investment odds are skewed more in our favour now that we’re in a bear market.  By simply counting the returns over all 12 month periods since 1950, we find that the frequency of the US stock market being up over 10% and 20% jumps significantly if the market fell by 20% or more during the previous 12 months.  This alone should give us some confidence, without having to predict the economic outcome. 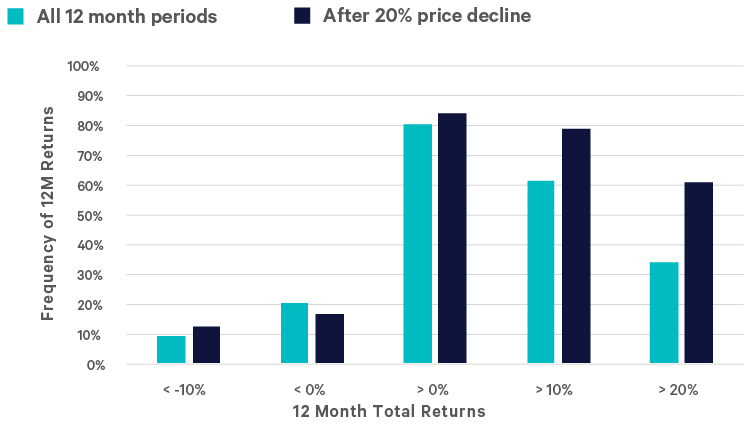 Source: DataStream, Bloomberg, Ibbotson. Based on the S&P 500 index, priced in USD.

Inflation-driven interest rate hikes are slowing down the US economy, and Europe is at extra risk from the energy crisis.  Stocks, in a bear market already, are pointing towards a mild recession.  We acknowledge that the economy and markets could get worse, but unless we get a severe recession or a structural break, most of the market damage may already be done.  Markets will likely remain choppy in the near-term, especially in the less liquid summer period, but over the next twelve months the odds are now more in our favour. Therefore we have increased our allocation to US equities in our discretionary portfolios.  However, we caution that this is not as clear an opportunity as we saw in 2020, and we may update our position as the situation evolves.

Please speak with your Davy Wealth Manager for recommendations specific to your circumstances, or if you have any other questions.

Warning: This article is neither investment advice nor an investment recommendation. It does not take into account the investment objectives, knowledge and experience or financial situation of any particular person and is not an invitation to invest.

You should seek advice in the context of your own personal circumstances prior to making any financial or investment decision from your adviser. Davy UK manages discretionary portfolios in accordance with agreed investment mandates and Advisory clients receive investment advice specific to their circumstances directly from their advisers. Should clients wish to contact their advisers at any time, they should do so in the usual way.

Warning: Forecasts are not a reliable indicator of future performance

An introduction to business protection

How do we build robust, goals based, portfolios?